it’s just a little thing, but how fun to be acknowledged in a couple greydon carter-era issues of vanity fair

january 2015: here is my original, unedited (“for length”) letter to the editor responding to a piece by james wolcott. you can click on the pic to read the published version.

— ‘I so feel both James Wolcott’s fascination and pain in the December issue’s “Me, My Selfie & I.”

Alongside the sigh-evoking viralization of society via broadcasting of self, I am increasingly leery of its close cousin, “personal branding.” Friendship and sharing seem to take a back seat to heightened and superficial presentation of self – I have left dinners and get togethers feeling I have been pitched all night, not befriended. Genuine interest in one other than one’s self and compatibility seeking in others disappears in favor of self-promotion. I get that we all need to make solid coin, but the sum of one’s deeds or skills appears to have taken a back seat to relentless quests for fame n fortune based solely on self-perceived, inherent worth, thanks to paths paved by so-called reality celebs. And when all personal radars are turned on and set to high, it only fosters inattentiveness – who is left to listen? Who is left to learn? Being old enough to have participated in both pre- and post-tech social environments is no doubt my “back when” awareness, but I ask myself – Mr. Wolcott too – if it’s nothing more than a generational divide kicking in, an Elvis-Pelvis shockability that will only date us, which is fundamentally – and amusingly – nothing new.’ — 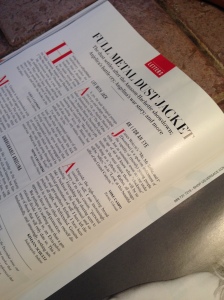 & here is my followup huff post article: nostalgia nouveau: tech on top of tech asks several questions & muses a bit more on personal branding, expounding on my published letter to the editor at vanity fair. living pre-tech & now with it, i also ask: do my questions age me or empower me?

below is the original, unedited text submitted to VF & a pic of its edit

February’s VF feature article, “France’s most notorious Dominatrix” picks up in the space of a few eloquent paragraphs where the blockbuster “50 Shades of Gray,” with its cheesy text, weak-tea-drinking/robo-O-ing heroine and “tragic” (He can be fixed! He can be redeemed!) antagonist trickles off. Toni Bentley’s portrayal of Catherine Robbe-Grillet and her mostly nameless, faceless but oh, so passionate minions left me feeling like I had had a real peek into a world so dark, so lush as to leave me wondering, just a little, if I and the rest of us daylight seekers were missing something, or at least missing out in some small way. The bonds depicted so overrode the bondage as to be enlightening. And the dark, tangential connections to the religified, mystical imprinting that yet drives Robbe-Grillet to do much and live as she does sound almost healthy when contrasted with the histories, legends and ills connected to the world’s great religions, for in Robbe-Grillet’s universe, all are adults and in full agreement.